Today we’re ready to reveal the second character coming soon in the Awesomenauts: Overdrive Expansion. His name is Chucho Krokk and he’s playable in the public beta right now! Click here to see how you can access the public beta.

Time for some lore:

Chucho comes from a rich, if slightly shady family called the Krokk. Let’s face facts here: they may have achieved fame and fortune on Calias by hunting down the biggest criminals in the galaxy, but they’re just as bad themselves. But hey, it takes a crook to catch a crook, so Chucho has taken up the family mantle of being a BAD-ASS BOUNTY HUNTER.

Which wouldn’t be so awkward if he didn’t have the world’s largest lisp. Oh well. No time for that, because the self-styled “Time Krokk” is on the hunt for an Awesomenaut who has been illegally travelling through time. In his inventory rests a suspicious, smelly time traveling slipper that might lead him to an altogether deadly confrontation with his unsuspecting bounty… 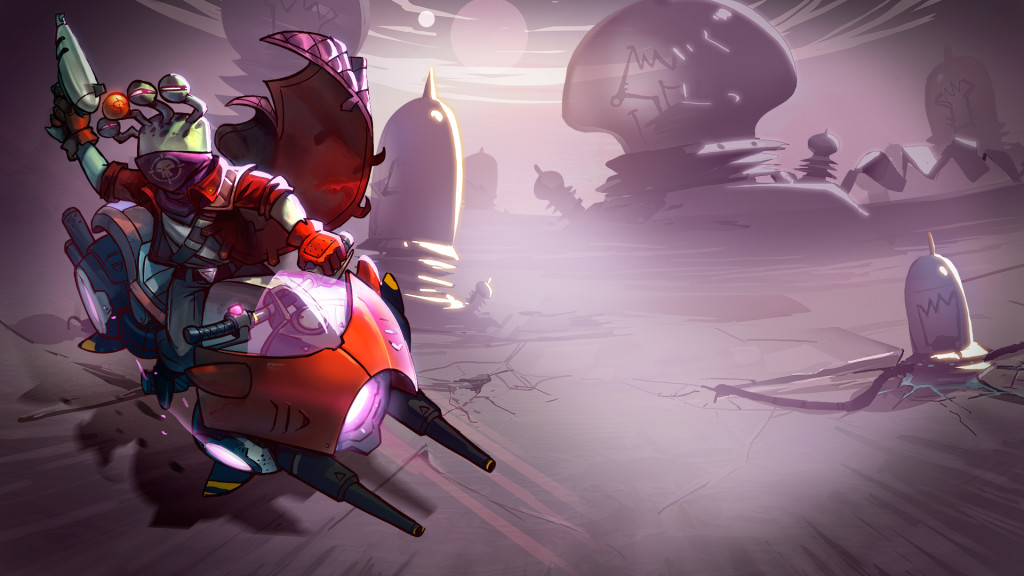 As mentioned, Chucho is a badass space mercenary. So badass in fact, he had one of his eyes replaced with a targeting sensor. He can fly around the battlefield using his trusty hyperbike which he lovingly calls Eleanor. Apart from giving him the ability to fly, Eleanor also transforms into a handy turret whenever Chucho dismounts. On top of all that Chucho has a ton of cool tricks up his sleeve. Or rather, bombs up his sleeve. Sticky bombs, that he hurls at enemies who will then be unable to escape their explosion.

Chucho will launch together with Prof. M. Yoolip and Jimmy & the LUX5000 in the Overdrive Expansion that’s coming out soon. To secure your access to these characters as soon as Overdrive goes live, you can pre-order now! As a pre-order bonus, you’ll get the Clockwork Yoolip skin for free! Either grab it on Steam or our own Overdrive site!