Awesomenauts 3.5: Unleash your Power is launching next week, on March 8th! When this update hits, you’ll be able to try out the many community creations that have been made by players during the Beta in the live game! Additionally, you’ll be able to leap into battle with Deadlift!

Let’s recap the stuff we discussed during the Streamisho! If you’d rather catch the entire show, you can do so here:
Ronimo Anniversary
Ronimo Games turned 10 today! Thanks for all your support over the years, and here’s to another ten awesome years!

We revealed the Deadlift theme song during the show, but we’ll be uploading it to other channels tomorrow. So if you didn’t catch it live, catch it on Youtube tomorrow!

Summertime Chucho
A brand-new skin for Chucho has been revealed and it’s the long-awaited Summertime Chucho! Chucho is taking some of time off from his busy bounty-hunting activities to spend a day at the beach. Or is he actually going undercover to hunt his target at a spa? Who knows! What we do know is that in the red team, Chucho will be riding an inflatable dolphin into battle, while he’ll have an inflatable Orca when he’s on the blue team! 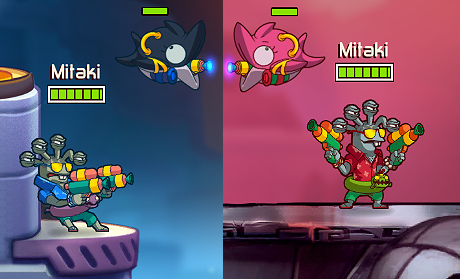 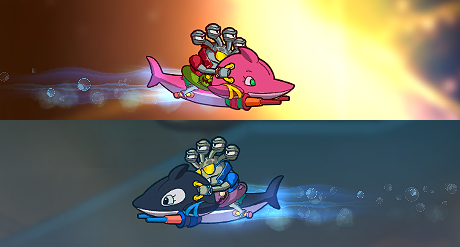 This new skin for Chucho Krokk will be available when the update launches next week.

Beta Updates
The Beta for Awesomenauts 3.5: Unleash your power has been updated earlier this week. This update adds a lot of functionality to the level editor, including the ability to upload custom game settings, your own AIs, and even player-created textures! This will allow you to make even more unique maps. Of course, all these creations you uploaded during the Beta will carry over into the live game when the update hits next week.

We looked at two very cool player-created maps during the Stream:
Underground, a map with unique mechanics by CationF. Players fighting beneath the surface will occasionally be blinded when the generator powering the lights shuts down, while players fighting in the upper levels are exposed to an aerial bombardement that the other team can deploy!

Moonrush, a very solid ‘Nauts map by BurkusCat, that features cool turret placement and a crusher that’s placed near the front turrets that allows defenders to destroy everything caught underneath it and also shield their turret for a short while!

Tournament and community news
The playoffs for Awesomenauts Arena League were played last week and it narrowed the field down from ten contestants to three! Tune in next Monday at 8PM EU time for the finals over at Twitch.tv/AwesomenautsArenaLeague, as Team Brunch and Little Boys go head-to-head in the Winners semi-finals, and Spade and his incredible team fight to make their way out of the losers bracket and into the Grand Finals!

And speaking of shows: we’ve got two community show coming up tomorrow! First up, Reall and Skner are hosting the eSportsProTips show where they discuss patch notes, recent changes, and generally help you to improve your game. This show will start at 4PM EU time and you can catch it at http://twitch.tv/esportsprotips. This show is followed by the Scrim Show at 6PM over at http://twitch.tv/awesomenautstrumble. During the Scrim Show, recent scrims from the competitive community are analysed, and it’s generally a great show.

Finally, you’re able to sign up for the ALWB: Galactic Warfare tournament by heading over to our official forums: http://www.awesomenauts.com/forum/viewtopic.php?f=6&t=49263. The tournament starts off this weekend with four all-star teams going head to head, but a separate bracket for the tournament is open to all players who are interested in joining the competitive community.

Sign up before March 10th! Matches for the public part of this tournament start on March 11th.